Classic films to enjoy this autumn 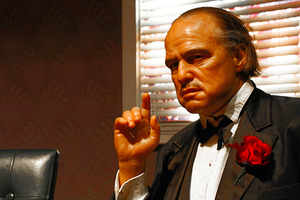 The nights are drawing in and ongoing Covid-19 restrictions mean we’re going to be spending more time indoors than usual this autumn and winter. It’s the perfect excuse to grab a bowl of popcorn and put on a classic film. There might be plenty of action-packed films coming out in the coming months after delays due to the pandemic but sometimes you can’t beat reliving the golden age of Hollywood.

So, here are eight classic films that are ideal for enjoying this autumn and a guaranteed to give you a dose of nostalgia.

When released in 1972, The Godfather was hailed as an instant classic. As soon as you put the film on, you’re pulled into the life of organised crime and family loyalty. At the time, it was the highest-grossing film ever made, winning praise from audiences and critics alike. Step back into New York City in 1945 and follow Michael Corleone, played by Al Pacino, as he rises to Don Corleone.

If you’re looking for something with more laughs, rom-com Breakfast at Tiffany’s is ideal. Stunning Audrey Hepburn plays Holly Golightly, a café society girl that falls for a struggling writer. The film received five nominations at the Academy Awards, including Best Actress for Hepburn, with Holly’s style, from the classic chignon hair and sunglasses to the black dress becoming iconic images. It’s a chance to take in some of the glitz of the era.

For a classic edge-of-your-seat thriller and horror, Psycho should be on your to-watch list. Produced and directed by legendary Alfred Hitchcock, it includes many of the elements that led to him becoming known as the Master of Suspense. When first released in 1960, the film was considered controversial and had mixed reviews but it’s since earned a spot on lists featuring the best films thanks to its iconic performances and a different direction to other films of the time.

If you’re looking for something you can watch with the whole family, Wizard of Oz guarantees to take you on an adventure. With memorable characters and tunes everyone knows, this 1939 flick remains a much-loved classic, despite failing to make a profit when it was first released. It’s a great choice to put on when you want a nostalgic film or are enjoying a movie night with children – just be sure to watch out for lions and tiger and bears.

Romantic drama Casablanca features established stars, but it didn’t become an instant hit. Once it won an Oscar for Best Picture its reputation gradually improved to earn its status as an iconic film. Set in World War II, the story follows Rick Blaine running a nightclub in Casablanca, then filled with spies, resistance fighters and Nazis, as he meets a former love interest fleeing German occupation with a new love.

Released in 1941, Citizen Kane was instantly considered a critical success, but it failed to recoup its cost at the box office. Yet, over the years, it’s gone on to become a classic and must-watch. In fact, Sight & Sound magazine asks critics and directors to name the greatest film once a decade, Citizen Kane came out top an incredible five times. The story follows a reporter that is assigned the task of deciphering a media magnate’s final words, painting a complex picture of his life filled with mystery.

In 1961, West Side Story put a modern twist on Shakespeare’s Romeo and Juliet. It scooped 10 Academy Awards, including Best Picture, and became the record holder for most wins for a musical. Packed with excellent show-stopping tunes, including America, you’ll be tapping your foot along in no time. A new film adaptation directed by Steven Spielberg is on the cards for next year, will it become an instant classic like the original?

Sticking with the musical theme, Singin’ in the Rain has plenty of fun, upbeat tunes to brighten up a gloomy autumn day – you might even end up wanting to sing in the rain yourself. With Gene Kelly acting as a choreographer, it’s not surprising that this classic is filled with amazing dance routines as the light-hearted story shows Hollywood transitions from silent films to talkies in the 1920s. Today, it still frequently features on lists of the greatest films of all time.